Hello! I am new to the group and came here looking for help! Someone might have answered the question before but I was unable to find it.
I have a 2012 focus. My radio made a crackling noise awhile back and then shut off. No sound would work. When I turned my car off and back on, it would work for awhile until this eventually quit working too. The radio only displays the time and temp. MONTHS (almost a year) later, I got in my car and the radio was working! Then it did the same thing- eventually cut off and after a few times of turning the car off and on, it won’t come back on. Still just displays the date and time. No sound plays on my backup sensor either. Any help/suggestions appreciated!!!
Sincerely, a girl who is trying to solve a problem without her husband’s help 😂 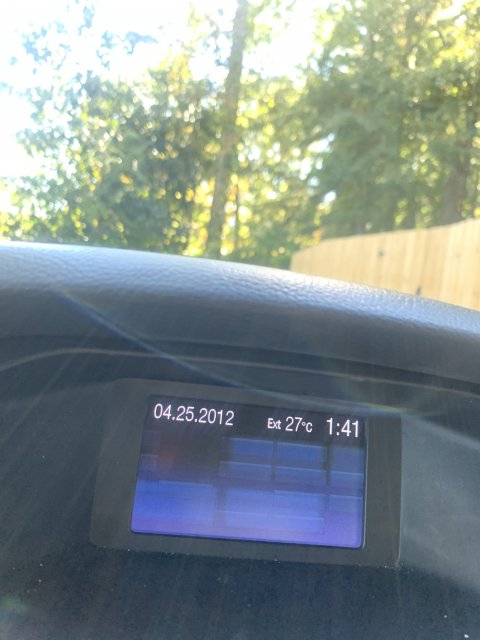 Ok, this might help you - or it might get you mad - can only give you some guidance - either way...

The above photo in the post, reminds me that this graphic background is from the times that Microsoft pushed SYNC and helpd Ford develop this in it's program.

So the radio then becomes SPECIFIC to the year, you just can't drop one in to replace it and expect it work - because the controller, that display is, the Accessory Protocol Interface Module (APIM) is specific to the Microsoft-side of the SYNC - so this was new at the time, Ford later refined this for later model years.

Why is this so important? IF you expect to fix this with a radio that works - it puts you in a position of having to find the EXACT year for that radio this vehicle used - and it's trim line - because of the type of background this APIM has, means that Software produced for this year was for Microsoft's SYNC - not Ford SYNC system in later years which changes the type of controller the Radio communicates with - the APIM in later years doesn't use that Graphic in the background.

So, it's not impossible to fix, just limits you to have the radio that is programmed to respond to this type of Graphic (Interface Module - that APIM) which means the needle in the haystack moment in finding the replacement radio for that year and that specific APIM.

​
So with someone's help, you'll need to extract (remove) the radio head from behind that bezel - that Bezel is the "keyboard" that talks to the APIM - the APIM talks to the Radio using the wiring harness and the APIMs programming to accomplish all the channels modes and volume (sound controls) - the Radio head unit is blank box with a slot in it for the CD/DVD (if equipped) and uses a proprietary chip that communicates with this APIM thru the harness from the Head unit. The Head unit is the Amp, tuner and all the bells and whistles those buttons on the keypad you press, make it perform.

You'll need to locate a replacement Head with that same exact string of letters and numbers as the one you have in your hand - you can try to use others, but the addressing that Microsoft SYNC version uses - might not be compatible with the FORD's later SYNC units.

Another thought to this, but goes against what your wishes are...

alyford97 said:
Sincerely, a girl who is trying to solve a problem without her husband’s help
Click to expand...
If Money is not a stumbling block, try getting a NEW APIM AND a New Radio Head.

Please understand that at the time the original APIM (Display) you have was made with a specific thing in mind, your radio - the effort from Microsoft and Ford only focused (ahemn) on that - now it has evolved into an even bigger range of infotainment systems.

So this kind of puts Ford in the realm of forcing itself to do the customer support for its efforts.

You will need a new APIM and New Radio Head, might lose the Graphic background - but the functionality of Radio and the APIM will or at least should be - backwards compatible to that year and have no issues with it working.

The current Harness the radio uses - then works with the new APIM, unless you can locate a working radio from a wreck or from a reseller that parts out these things for re-sale (eBay type of thing) - but Caveat Emptor applies here - anything used is - well, er - used. So, keep in mind, it may or may not work - which refers back the Peabody and Sherman efforts to find the needle in that haystack.
You must log in or register to reply here.
Share: Facebook Twitter Google+ Reddit Pinterest Tumblr WhatsApp Email Link