Focus ST and RS will appear at The 2017 SEMA Show

Ford will once again have a healthy selection of custom cars at its SEMA show booth this year. One of the models featured will be the Ford Focus, and four groups each customized one for the show. Three of them are built off of the Focus RS, while one group opted for the Focus ST. Their styles range from a flashy street car to a rally-ready hatchback. Check each of them out below. 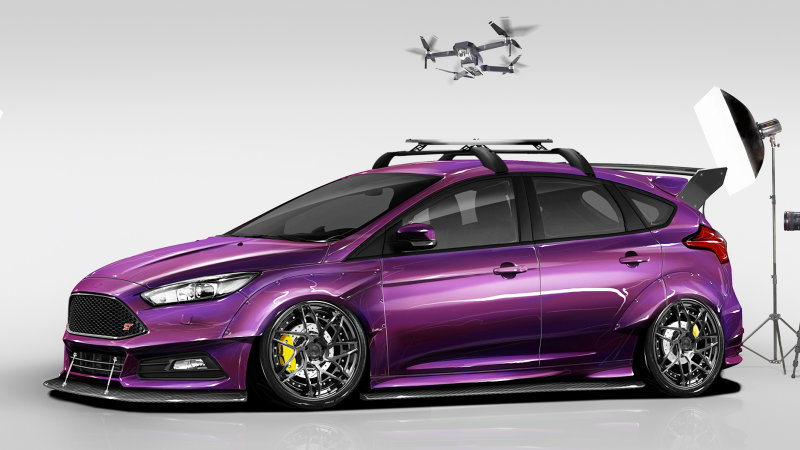 What is it?
Blood Type Racing decided to skip the top-tier Focus RS in favor of the more accessible front-drive Focus ST. They then modified such that it should scare quite a few Focus RSs. It features a turbo upgrade kit from Full-Race and it uses the largest compatible turbocharger available, a BorgWarner EFR 7163. According to the Full-Race site, this kit is capable of producing up to 500 horsepower. In addition to the turbo upgrade, Blood Type Racing added a Ford Performance exhaust and short-throw shifter, as well as a custom tune using a COBB Accessport tuner. Under the car is an Air Lift performance suspension, a Wilwood brake kit and a chassis brace. Exterior enhancements include B-Forged Performance 768SL wheels, large fender flares, a splitter an rear wing from RAlly Innovations, and a Purple-People-Eater-grade paint scheme. The cherry on top is literally on top of the car in the form of a landing pad for a drone. Inside are carbon fiber seats, a carbon fiber steering wheel, and a roll bar and harness.

Our take
It's maybe a little flashy for our tastes, but it's nice to see people still giving some love to the Focus ST. After all, not everyone has Focus RS money. The performance upgrades are impressive, too. 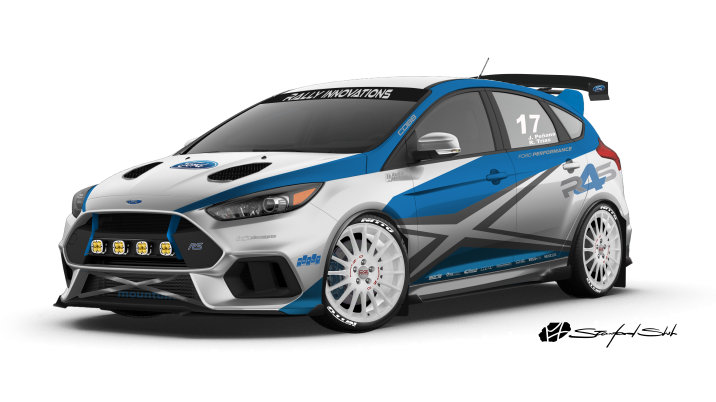 What is it?
While the Blood Type Racing Focus is geared toward the street, the Rally Innovations Focus RS is all about going fast and doing so on dirt roads. Under the hood the 2.3-liter engine is treated to Mountune goodies including an intake kit and intercooler upgrade, as well as silicone replacement hoses. The exhaust features a Borla 3-inch downpipe and a Ford Performance exhaust. The engine is tuned with a COBB Accessport tuner. Handling and braking upgrades include RS-R coilover suspension, Eibach sway bars front and rear, slotted brake rotors, and a camber adjustment kit. Inside, the rear seats have been removed, a roll cage fitted, harnesses installed, and gauges mounted for boost, oil, and air/fuel ratio. The whole package is brought together with OZ Superturismo GT wheels, a quartet of square auxiliary lights, and Rally Innovations' own rear wing, hood vents, wheel diverters, mud flaps, hood vents, and aluminum splitters.

Our take
We love how performance-oriented this Focus is. Rally Innovations also nailed the rally car look with the auxiliary lights and bright white OZ wheels. It would only look better if it was coated in dirt. 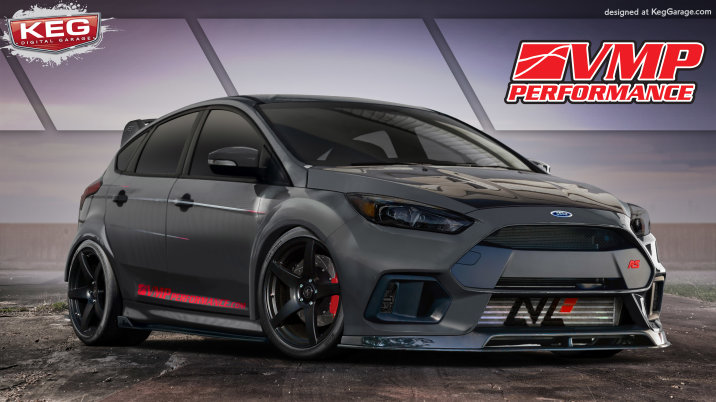 What is it?
The Focus RS from VMP Performance is one of the more mildly modified Fords as far as performance goes. Engine mods only go so far as a Ford Performance exhaust and short-throw shifter, a dual-port blow-off valve, and a COBB carbon fiber intake and Accessport tuner. Like the Blood Type Racing Focus, this Focus has an Air Lift suspension. It also uses slotted rotors all around. Visually, there are more changes. The stock wheels give way to Forgestar CF5 wheels, and everywhere you look there are carbon fiber parts. The hood, rear wing, rear diffuser, front splitter, fog light surrounds and rocker panel splitters are all made of woven carbon. Even the inside has Ford's carbon fiber shift knob, instrument cover and window switch surround.

Our take
Man, someone at VMP Performance really loves carbon fiber. We don't know that we love it as much, but we are impressed at how subtle the overall package is, especially in the dark gray color. 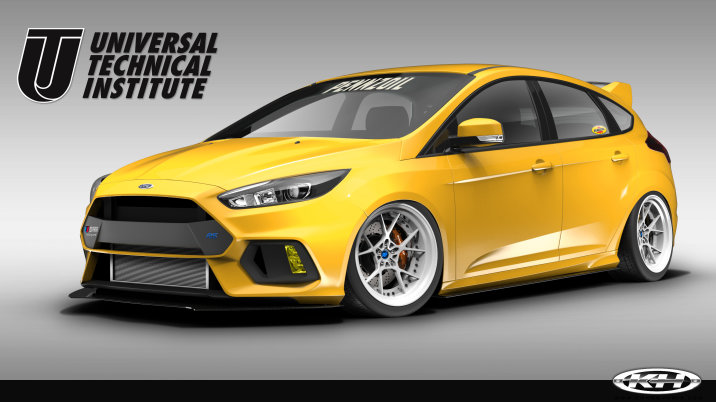 What is it?
The yellow Focus RS from UTI, Tjin Edition and Pennzoil is also probably the most mellow as far as modifications are concerned. Engine upgrades include a Ford Performance exhaust and an intake and intercooler from Full-Race. The car is suspended by BC Racing coilovers, and is stopped by massive 6-piston brakes. Outside, the only major change is the addition of Rotiform wheels, a lower ride height, and a bold yellow paint job. Inside is a Kicker sound system and the same carbon fiber Ford accessories as in the VMP Performance Focus RS.

Our take
This Focus RS goes to show that it doesn't take much to make a visually sharp performance car. A lower ride height, aftermarket wheels, a nice paint scheme and just enough performance upgrades are all you need to make a good impression.